Prescription started from 2005, prescriptions in genuine boxes are also OK. Shinjuku has the highest prescription amount of Propecia in Japan.

Genuine prescription in an unopened box

Please be careful about unapproved domestically unapproved imported medicines in bottles and sheets without Japanese names at bargain clinics. Even if unapproved drugs in Japan have serious side effects, the drug side effect relief system is not applied. We prescribe Propecia in an unopened box from a domestic manufacturer.

There are no medical examination fees, consultation fees, or prescription fees, so there is no charge other than medicine. No health insurance card is required. Since it is an in-hospital prescription, the prescription will be completed in about 10 minutes from the visit. Propecia is an adult male-only drug and cannot be taken by women or minors. Propecia prescription requires a visit, not by email or phone. If you have any medicines you are taking, please write down the name of the medicine or bring the medicine with you.

Propecia is a hair-growth drug developed by Merck & Co., Inc. of the United States as a treatment for AGA “male pattern baldness”. AGA is a condition in which the hair on the forehead and the crown of the head, which is common in adult men, is thinned. Propecia is already used as an effective treatment for AGA in more than 60 countries around the world, and was launched in Japan by Banyu Pharmaceutical Co., Ltd. (currently Organon ph.) in December 2005. Our hospital started prescribing Propecia on the day of its release, and has already been prescribing for more than 11 years. To date, we have prescribed Propecia to more than 30,000 people for the first visit alone. The number of people who have already experienced the effectiveness of Propecia is increasing, and it has become a very popular drug.

The main causative agent of AGA (male pattern baldness) is DHT (dihydrotestosterone) in the hair root. AGA has confirmed a large amount of DHT in the hair loss area. DHT is made from the male hormone testosterone by 5α-reductase, and high levels of this DHT end the hair growth phase. As a result, the hair comes off before it grows into thick hair, and many thin and short hairs become thin. 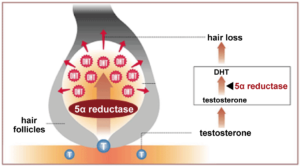 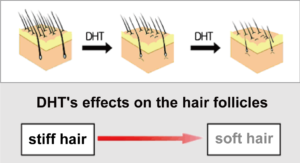 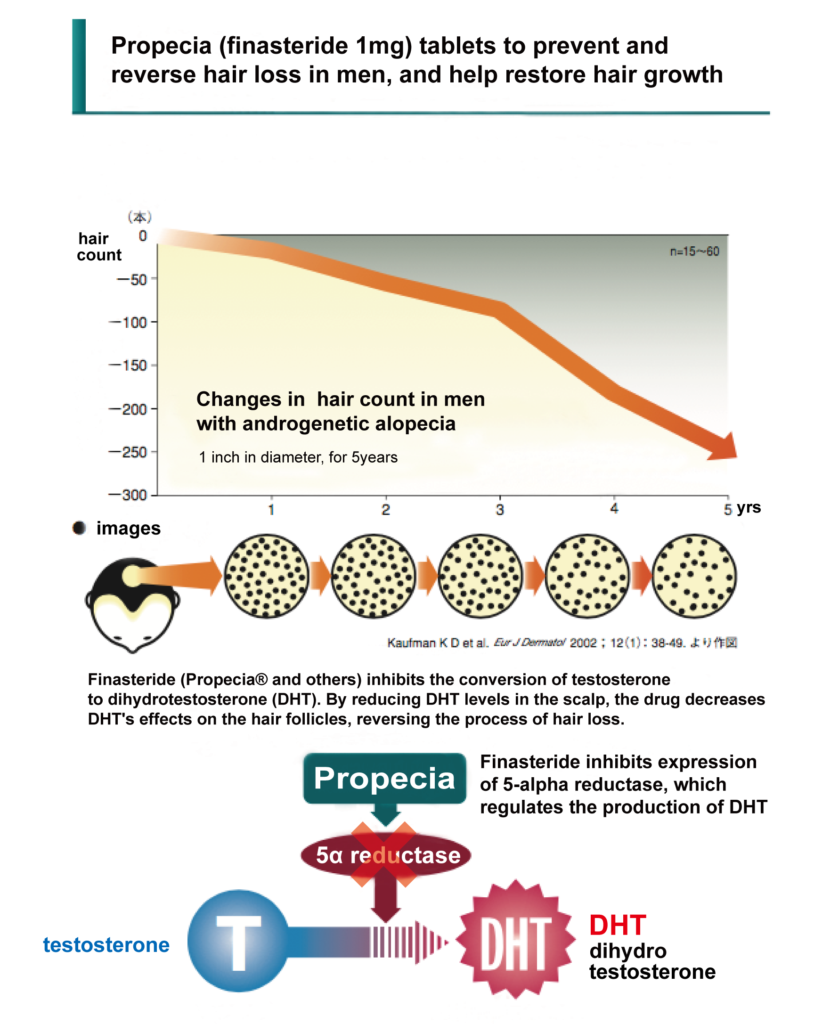 Mechanism of action of AGA and Propecia

An epoch-making drug to treat this AGA is Propecia (ingredient Finasteride) developed by Merck & Co., Inc. of the United States. Propecia is already used in more than 60 countries around the world and was launched in Japan by Banyu Pharmaceutical Co., Ltd. (currently MSD) in December 2005. Propecia is an internal medicine that treats AGA by suppressing the production of a substance made from a male hormone called DHT (dihydrotestosterone), which is the cause of AGA in hair roots. Traditionally, AGA measures have included wigs and surgical self-transplantation, but the fees and thresholds have been high. Propecia is a revolutionary drug that treats AGA with just one tablet daily. Propecia costs about 6,000 yen a month (4,000 yen for generics), so it’s quite reasonable compared to hair esthetics that cost tens of thousands of yen a month. It has been almost 11 years since Propecia was released in Japan, and many people started taking Propecia with half confidence at first, but now the number of repeaters who have realized the hair growth effect of Propecia is increasing. At our hospital, we started prescribing Propecia on the day of launch, and we have prescribed Propecia to 30,000 people only for the first visit. Nowadays, many repeaters are saying, “Propecia works well!” If you’re suffering from AGA, don’t give up, Propecia is a drug that’s well worth a try. 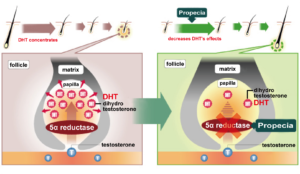 How to take Propecia

90% realized the effect after using for 6 months or more, effective for 98% in 3 years

Take 1 tablet daily. In some cases, the effect of reducing hair loss may appear in about 3 months, but it is necessary to take it every day for 6 months before confirmation. If it works, the progress of hair loss will stop in about 6 months and it will start to increase. In particular, the hair-growth effect that rises to the right is seen from the second half to one year after taking the drug.

According to MSD statistics, 90% of people who have used Propecia for more than 6 months are satisfied with the effect.
The photo is a remarkable improvement example in the clinical results that it is effective for 98% in 3 years.

We started prescribing Propecia on the day of its release (December 2005), and many people have already taken it for a long time, so Propecia works! Many repeaters who could feel the effect are visiting the hospital every day. If you are new to Propecia, please expect it and take it.

Because it is taken every day, domestic genuine Propecia

Propecia is a drug that is taken every day for a long period of time, so please use a domestic genuine product in consideration of safety. Domestic genuine Propecia has a sheet type as shown in the picture below. 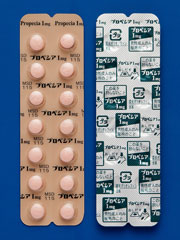 Propecia sheet (front and back) 28 tablets in two sheets

Those whose notation is not written as Propecia in Japanese are not domestic genuine products. The sheet type contains 14 tablets and the bottle type contains 90 tablets. Compact bottles are tough against external forces and provide perfect protection for tablets.

We have a lot of Propecia prescriptions every day, and we always have the latest Propecia. The in-hospital inventory is abundant, so it will never run out of stock. Propecia is valid for about two and a half years. We also accept long-term prescriptions such as one year or more at a time.

Side effects of Propecia

Although a small number, side effects include ED / erectile dysfunction (less than 1%) and decreased libido (less than 1-5%). If you have ED symptoms, stop Propecia or improve with ED treatments such as Viagra. In addition, there is a decrease in semen volume (less than 1%) and an unknown frequency (spontaneous report or overseas report), which may cause deterioration of semen quality, so it is recommended to stop taking it while making small pieces. We have a long history of prescribing ED treatments, so please feel free to contact us if you experience ED symptoms.

Take 1 tablet once a day. Taking two tablets of Propecia does not double the effect.

・ Blood donation is prohibited for those who are taking this medicine. The Japanese Red Cross Society’s Blood Division will donate blood to those who are taking Propecia, as in the United States, with a one-month washout period.
・ Do not break the tablet. If cracked Propecia is absorbed into the body of a pregnant woman, it can affect the foetation.
-In January 2009, Propecia was removed from the doping list. (Athletes can also use it with confidence)
・ If you have liver dysfunction, please consult a doctor. Propecia tablets are drugs that are metabolized in the liver. There are reports of elevated liver enzymes while taking. If you have liver dysfunction, consult your doctor who prescribes Propecia tablets.
・ Take only for male adults. Propecia has not been shown to be effective in women. Do not take if pregnant, potentially pregnant or breastfeeding. (If a pregnant woman takes this drug, it may affect the normal development of the reproductive organs of the male foetation.)
・ Those who are planning to undergo a prostate cancer test
The ingredients of Propecia Tablets are prostate cancer. It is known to reduce the PSA value measured by the test by about 50%. Therefore, use the value obtained by doubling the measured PSA concentration as a guide for evaluation.
For more detailed Propecia information, please see the FAQ about Propecia below.

The Internet is full of fake Propecia. Propecia is a drug that you take for a long time. The cost has been reduced due to the availability of generic drugs, so we recommend taking regular domestic drugs.

Combined use of Propecia or Zagallo  is also effective. for more details

Combined use of Propecia or Zagallo is also effective. for more details

Propecia is a medicine that you take every day for a long time. If you have a chronic illness or are worried about taking other medicines , please contact us by e-mail form to see if you can use it with confidence before prescribing Propecia . We will look it up at our hospital and give you appropriate advice. Please write down the name of the disease or condition and the name of the drug you are using (in katakana) before sending.