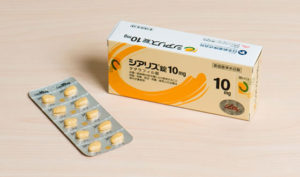 Cialis is popular for its 36-hour lasting effect and ease of use. Cialis has the highest prescription amount in Japan in Shinjuku. If you have any medicines you are taking, please write down the name of the medicine and visit us.

Our clinic is a clinic specializing in ED treatment drug prescription, and all the staff are male. Since it is an in-hospital prescription, the prescription will be completed in about 10 minutes from the visit. The initial consultation fee is free, so if you prescribe one tablet of Cialis 10 mg, it costs only 1,500 yen (total amount). Without the presence of a female nurse, she does not take off her clothes or examine her lower body directly. No reservation is required, so please feel free to come and visit us for the first time. Cialis prescription requires a visit, not by email or phone. If you have any medications you are taking, please write down the name of the medication or bring your medication.

Cialis is the third ED treatment in Japan

Cialis is the third ED treatment in Japan, developed by Eli Lilly and Company in the United States and launched in 2007. At the time of launch, it was launched by Eli Lilly Japan, and Nippon Shinyaku is in charge of the current launch. Its popularity is that it has a much longer duration of action (36 hours) than other ED treatments.

Cialis has a 36-hour lasting effect!

The greatest feature of Cialis is that it lasts for a very long time, 36 hours after taking it. It starts to work in about 30 minutes after taking it, and once it is absorbed, it works for a long time of 36 hours (a whole day and a half), so there is no influence of the subsequent meals and there is a high degree of freedom without having to think about the timing of taking it. Is popular. Cialis’s high-capacity 20mg has a strong effect and can exert sufficient power in every scene. Overseas, it is nicknamed “Weekend Pill” because it means that you can take it on weekends and take a break whenever you like, and in France and other countries, it has become the top share of ED treatment drugs, overtaking Viagra and Levitra. It’s a medicine. Our in-hospital prescription share also surpasses Viagra to become the top.

Ingredients and effects of Cialis

The ingredient of Cialis is tadalafil. Tadalafil is a PDE-5 (5-phosphodiesterase) inhibitor. When the enzyme PDE-5 (5-phosphodiesterase) increases in the blood vessels, the erection state diminishes, but Cialis has the effect of interfering with the action of this enzyme, which helps Cialis to sustain the erection. It is. Other ED treatments, Viagra and Levitra, are PDE-5 inhibitors like Cialis, but Cialis (tadalafil) is characterized by long-acting action.

Still erected with Cialis? What is alcohol? Are you full?

Cialis does not stay erected for 36 hours because it has the effect of erecting when stimulated. Some drinking is fine, but it may or may not be less effective in deep drinking. If you are full, absorption may be poor and it may not be effective, so wait at least 1 hour after eating before taking. Cialis is not an aphrodisiac or lust enhancer Cialis is not an aphrodisiac or lust enhancer and can be difficult to work without sexual desire at all. Even if you take it, you will not get an erection without sexual stimulation. An erection occurs only after receiving sexual stimulation, and the erection subsides when there is no sexual stimulation. Sexual stimulation can be visual or tactile. This also applies to other ED treatments, Viagra and Levitra.

Once you take Cialis, you can take the next one after 24 hours. (Do not take twice on the same day) You may take other ED treatments such as Viagra after 24 hours.

Side effects of Cialis

You may have hot face, stuffy nose, headache, indigestion, back pain, muscle aches, and color blindness. The severity of these side effects is mild and temporary. Cialis has a vasodilatory effect and lowers blood pressure. If you always have a headache with Cialis, you may want to use it with over-the-counter headache medications (such as bufferin).

Nippon Shinyaku’s genuine product is 10 tablets per one sheet and is written in Japanese.

Cialis
2007 No impact Popular!
The only drug that can be taken before meals 36 hours Long-acting, few side effects
Popular target for high degree of freedom after taking 10mg
20mg

Be careful with grapefruit juice

When used in combination with grapefruit juice, it may increase blood levels, make Cialis too effective, and increase side effects, so be careful. Other drugs that require attention due to high blood levels include the macrolide antibiotic clarithromycin, the antifungal drug itraconazole, the hepatitis drug telaprevir (teravic), and some anti-AIDS virus drugs. ..

Be careful if you are taking blood pressure medication

Cialis cannot be used if you are using any of the following Cialis contraindicated medications:

you can’t take Cialis if

Cialis cannot be taken in the following cases:

As shown above, nitric acid agents such as nitroglycerin are contraindicated in combination. If you have a nitro during a heart attack, it is dangerous and you should consult your doctor. Minors cannot prescribe.

Since there are many concomitant medications and contraindications for Cialis, it is very dangerous to easily take ED treatments such as Cialis other than those imported by individuals or prescribed by a doctor given by another person.